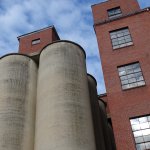 Could it be a restaurant, an entertainment center, retail space, or something related to the Ephrata Rail Trail, which starts beneath the Wenger building between Main and Franklin streets?

“We’re looking at this with an open mind,” said Andrea Glass, director of Ephrata Area Chamber of Commerce.

Glass is one of 19 people on teams established to come up with ideas to draw investment and stakeholders in the property, owned by Ephrata National Bank.

“This is an important process for Ephrata and we greatly value the community’s feedback and opinion,” she said. “We would love to see them at the public meeting and be engaged with the entire process, from planning to when the eventual plan is delivered.”

She was referring to a two-day event, occurring at the Brossman Building April 27-28, that brings together professionals from around Lancaster County with backgrounds in real estate development, construction, finance and business development.

These community volunteers hope the redevelopment of the Wenger property could perhaps be a catalyst for further development.

The teams were developed as part of the Lancaster Boroughs Collaborative, which launched a pilot Conceptual Development Program to assess the redevelopment potential for the Wenger Feed Mill.

Potential stakeholders can get a tour of the property on April 27 and the community is invited to a 7 p.m. meeting to provide feedback, Glass said.

Jim Brown, Ephrata National Bank director of facilities and bank historian, said the Wenger Feed Mill has been a staple in downtown Ephrata for many years.

“It was founded by Clayton P. Wenger in 1919, and began operations shortly afterwards,” he said. “In 1924 the business suffered a major blow from a devastating fire so large that trucks were summoned from Lancaster. Being of strong Lancaster County constitution, Mr. Wenger resumed business within days of the fire. The building was repaired and is now known as “the old section” of the Feed Mill.

In 1944, Clayton turned over the business to his son, Robert C. Wenger. In 1948, after two attempts to add a newer more modern section, the Civilian Production Administration of the War Production Board, finally allowed the construction. The country was in need of supplies for livestock used in the War effort. This facility was modern in every sense, was a busy hub of activity with grain being delivered by farmers, and processed feed being sent out to keep livestock fed which in turn kept the public supplied with meats and products.

“The feed mill kept operating quietly and prudently under Mr. Wenger’s careful and modest business approach,” Brown said. “Mr. Wenger was on the Ephrata National Bank’s board of directors for many years. He was a very strong advocate of purchasing the bank’s stock.

Brown is also part of the team of volunteers tasked with assessing the feasibility of redeveloping the mill building and understanding what opportunities fit the community.

Resource team member John Biemiller, of the Economic Development Company of Lancaster County, said the Conceptual Development Program is a new approach “to finding a path to redevelopment” and Wenger Feed Mill is “a unique, historic and long-vacant property that has the potential to be a key contributor to downtown Ephrata.”

“The Lancaster County Boroughs Collaborative was created by the Economic Development Company of Lancaster County to find ways to help our 18 boroughs take advantage of economic and community development opportunities that exist within their borders but that often face many challenges to development and redevelopment,” Biemiller said.

As one of the targeted borough properties, Wenger Feed Mill will be involved in a pilot pre-development assessment and concept review. The review identifies projects that are supported by the host borough and have “little/no activity now, willing/engaged ownership, a likelihood of success, and the greatest potential impact in the community.”

Bob Thompson, Ephrata Borough manager is also a volunteer on the team compiled as part of the pilot program. He said the program offers a great opportunity to conceptualize potential future uses for an underutilized property.

“We are very fortunate that the Economic Development Company of Lancaster was able to assemble a team of professionals to dedicate their time to identify how this property can once again become vital to the Ephrata community,” Thompson said. “It is our hope that this effort will develop a model for future assessment for other underutilized properties within Lancaster.

Brown noted the history of the Wenger building and Mr. Wenger’s “careful and conservative nature of the bank’s investment practices up until his death.”

“He counted on a sure thing,” Brown said. “To that end, Mr. Wenger signed agreements to sell selected buildings and parcels to the Ephrata National Bank, with an unusual caveat. Operating the feed mill was very much ingrained in his personal make up. He reserved the right to operate the Feed Mill until his 90th birthday.”

The Bank obliged his wishes, and allowed Mr. Wenger to operate the Feed Mill until July of 2005. After the Bank took possession, the building was secured, decommissioned, and shuttered.

To read the full article from Ephrata Review, click here.