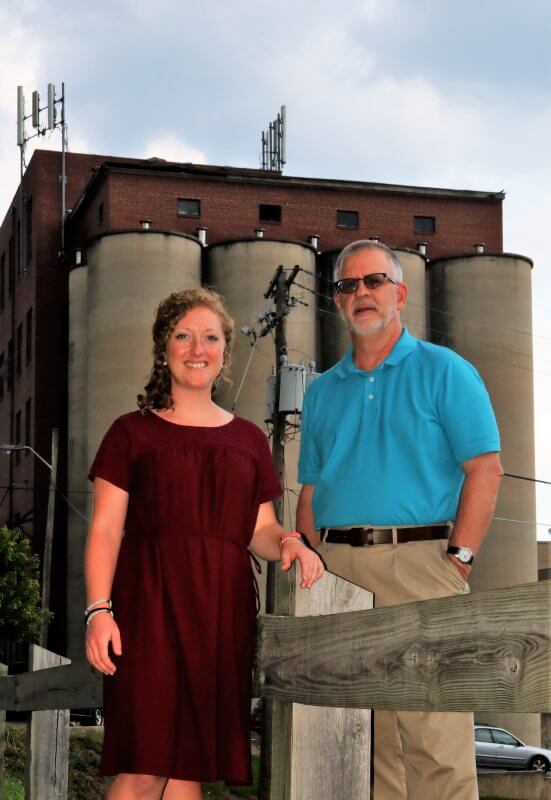 “Ephrata people say, ‘We want to be like Lititz’. Well, yeah. But I want to be like Ephrata,” Rick Jackson told a group of about 50 people gathered at The Weaver Markets banquet facility in Adamstown.

Jackson is a landscape architect and a principal with ELA Group, which has its home office in, of all places, Lititz.

Jackson’s audience members were with the Ephrata/Cocalico Consortium, part of the Lancaster Chamber of Commerce and Industry. The consortium meets regularly to talk about topics of interest to the region. The former C.P. Wenger Feed Mill was the topic at the Wednesday, July 12, meeting. Jackson, working with the Lancaster Economic Development Co., chaired an ambitious two-day SWOT analysis of the mill’s economic potential. “SWOT” stands for “strengths, weaknesses, opportunities and threats.”

On April 27 and 28, an 18-member SWOT team examined the mill’s physical present, then mulled and advocated for its future role in the Ephrata community. On the evening of April 27, they held a public meeting to gather citizen input. The SWOT team included seasoned professionals from throughout Lancaster County’s business community. Team members volunteered their time and services. Their findings were compiled in a “Conceptual Development Program” brochure published by the Economic Development Co. as part of its Lancaster County Boroughs Collaborative program.

The boroughs collaborative is fairly new to EDC. As part of that program, EDC identified some 65 vacant or underutilized properties within the county’s 18 boroughs that are candidates for development. Half-a-dozen of those properties were chosen as most likely to benefit from a SWOT analysis, and the C. P. Wenger property was picked to be the pilot project.

Jackson chaired the project and he shared his enthusiasm for downtown Ephrata. Not that the Lititz resident and business owner was knocking Ephrata’s six-miles-to-the-west neighbor. “Recognize that Lititz has a much different scale to it,” he said. What Jackson likes about downtown Ephrata is its physical infrastructure. He likes its location midway between Reading and Lancaster, the community amenities, and its access to great roads.

John Biemiller, EDC’s executive vice president and chief operating officer, introduced Jackson and the day’s other speaker, Laura Gebhart, EDC economic development coordinator. Biemiller said the conceptual development program for the C. P. Wenger property began when he approached Ephrata National Bank with a proposal to have as many as 20 professionals visit the property, define its strengths and weaknesses, look at its opportunities and identify any threats to its development. Or as much of that work as could be done in a two-day dawn-to-dusk effort.

The bank was definitely interested. The SWOT team was assembled and ready to go to work, according to Gebhart. In addition to their two days in Ephrata, the team members received a thick packet of homework. They included real estate developers, business development professionals, borough personnel, the local chamber “…an incredibly dedicated team of individuals,” Gebhart said.

She also pointed out that there are similar properties in other parts of the county, like The Gerberich-Payne shoe factory in Mount Joy and the Moose Lodge in Elizabethtown.

Gebhart said volunteers talked to more than 100 borough residents about their ideas for the mill. Family-friendly and rail trail-related uses were high on the list. Office space and a business incubator were mentioned. A restaurant — or two — and a brew pub were suggested, as were small retail shops with unique offerings. Event space for meetings and receptions and a live music venue, were noted, as were a gym and public space for gallery and art showings.

There are many hurdles to the kind of development that could transform the old C.P. Wenger Feed Mill into a bustling business and social hub, maybe even a kind of five-story Lititz East.

One obstacle, according to Biemiller, is negative thinking, which bubbled up fairly quickly in the EDC effort. Negative thinking especially about parking, was a subject mentioned by two audience members.

You have to first look at how much parking you have and how much you need, Biemiller said, before doing something drastic, like building a parking garage over the Ephrata National Bank parking lot. There is a free parking garage behind the Main Theater, but people tend not to use it because they don’t realize it’s there, or because they think it’s too far to walk to downtown.

Gebhart chimed in: “If you park at the mall, and you’re far out in the parking lot, if you can even see the mall, you’re okay, even if it’s a distance of what might be three blocks in an urban setting.”

People of Ephrata, it was said at this meeting, think there’s a parking problem if they can’t park directly in front of the building they want to go into.

While not exactly a negative thought, Biemiller talked at some length about the financial issues that would need to be overcome in any redevelopment of the mill. A very rough estimate would put the cost between $5.8 million and $7.1 million.

The EDC guess is that space in the building could be rented for $8 per square foot per year. That revenue, according to EDC’s best estimate would not be enough to service the debt on the project, so financial tools like grants, loans, and tax breaks would have to come into play to make the project a reality.

The Conceptual Development Program brochure did end on a positive note. In the section entitled “Final Thoughts,” it closed with this:

“The professionals serving on the CDT are optimistic about the prospects for re/development of the C.P. Wenger Feed Mill building and site in downtown Ephrata. Notwithstanding, it will be a challenging project that will require substantial investment of resources. This site and building, with its authentic history and potential for becoming a special place in the community, could be integral to the central business district. Moreover, this is exactly the type of project that could catalyze additional redevelopment in the downtown.”